From a cool start the day warmed and brightened with long periods of sunshine. The source of disturbance off Mudbank and Duckpond, Exmouth was unseen but whatever happened displaced large number of wildfowl to the recording area, which then hosted impressive counts of 918 Wigeon, 256 Dark-bellied Brent Goose with 22 Pale-bellied Brent Goose and 107 Shelduck, an extraordinary count and exceeds the previous October max count here of 39 in 2009. In fact, available records suggest this might be the highest October count ever for the entire Exe Estuary.

Wildlife news: the site's 4th and 5th record of Locust Blowfly Stomorhina lunata, previously a rare migrant from Africa and recently has become more frequently recorded in the UK. Common insects attracted out into the sunshine were a few Large White, Speckled Wood and single Common Blue, Small Copper and Red Admiral. And as expected at this time of the year, a few Common Darter and Migrant Darter. 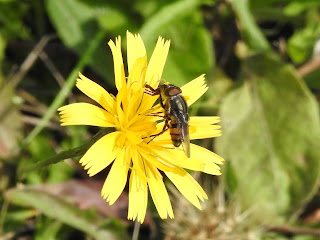