A bit milky first thing with reduced visibility, inshore were 21 Great Crested Grebe, c.20 Gannet, 15 Common Scoter, six Red-throated Diver, a few Guillemot and two Great Northern Diver.  No sign of yesterday's Purple Sandpiper on the exposed rocks below Langstone Rock, just seven Turnstone and a Kingfisher again there today.  The yellow-colour ringed '632' Scandinavian Rock Pipit was again on the seawall and a Grey Wagtail was in this area.

Similar selection of bird on Main Pond over recent weeks with two Shoveler, two Water Rail, some Moorhen, a Mallard and a trilling Little Grebe.

In the lovely calm conditions and bright sunshine, staff were kept very busy advising folks about responsible use of the site and understandably receive questions about why dog access is not permitted beyond groyne 9 during low tide, whilst people can continue past groyne 9.  Aside from that fact an enforceable bylaw is in place, today presented a good example of why this is the case with the presence of 158 Brent Goose that chose to rest near the beach waterline beyond groyne 9 at low tide.  A relatively confiding species, they were content to be there with the passage of people slowly walking by, but they would not be safe there from unleased dogs.   The bylaw reflects that the presence of important bird flocks can be at any state of tide and at any time of year, so in addition and certain times, people are also asked to avoid this particular area when large numbers of more disturbance sensitive species are presence.   A dog-friendly link to the various zone is click here.

Back to bird news, in the woods and bushes, with some taking advantage of the feeders, were c.35 Goldfinch, 27 Greenfinch, 19 Long-tailed Tit, nine Goldcrest, seven colybita Chiffchaff, four Siskin, three Song Thrush, two Bullfinch, two Chaffinch, a Coal Tit and a Great Spotted Woodpecker.  Highlights were a Firecrest and a vocal showy Siberian Chiffchaff behind the Main Pond.

Other news: in what appears to be a targeted arson attack, the Tractor Compound suffered severe damage last night with the fire brigade attending a large fire in the early hours.  The entire shed and its contents, including important interpretation boards were incinerated and the tractor looks irreparably damaged. To carefully avoid prejudicing the ongoing police investigation, this has apparently gone very well.  Motive, if known at all yet, has not been shared. The rest of the site, including the Visitor Centre, seem OK. 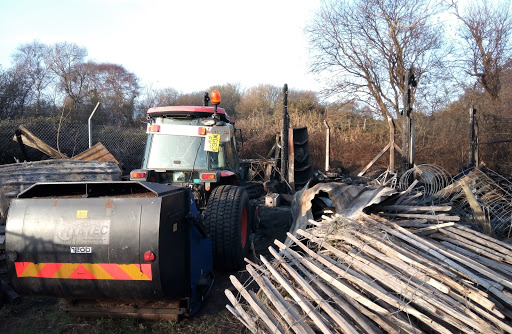