A total of 32 bee species were seen during the year, with many of the usual Spring species missed. The year started well with a winter active Buff-tailed Bumblebee on 1 January and a very “early” Early Bumblebee queen on 15 January both nectaring on Hebe. A Trimmer’s Mining Bee Andrena trimmerana discovered on 12 March, was the first of six new bee species for the Warren in 2020. 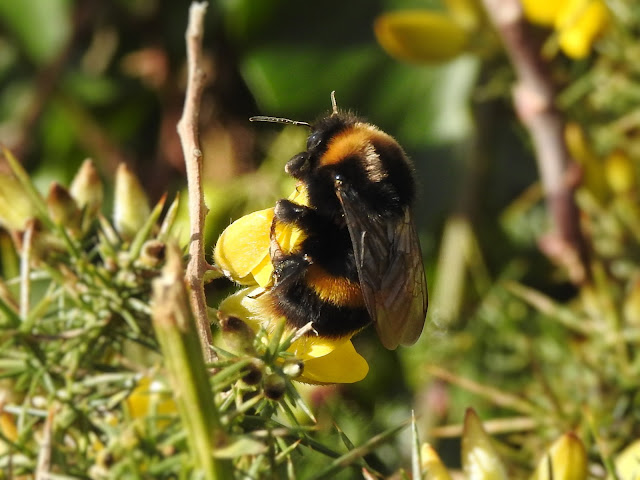 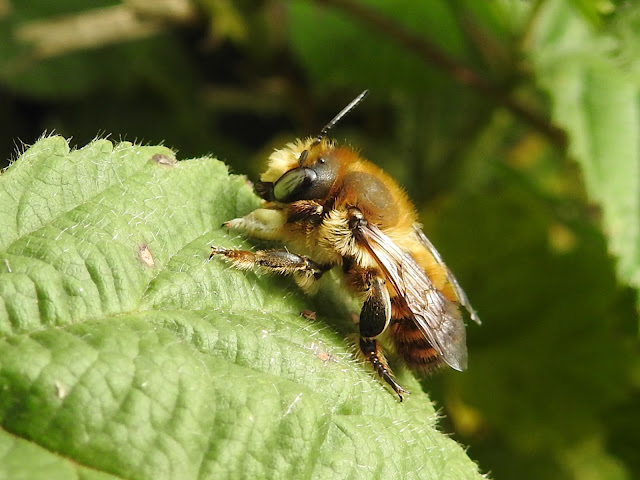 The first Yellow-legged Mining Bee Andrena flavipes was eventually recorded on 19 May, with Water-dropwort Mining Bee A. ampla on 21 May, and Sandpit Mining Bee A. barbilabris and Coastal Leafcutter Megachile maritima on 4 June. The first of many Silvery Leafcutter Megachile leachella were on the wing from 28 May, evidence of their handiwork was evident on favoured Birch saplings and almost every Bramble flower seemed occupied. 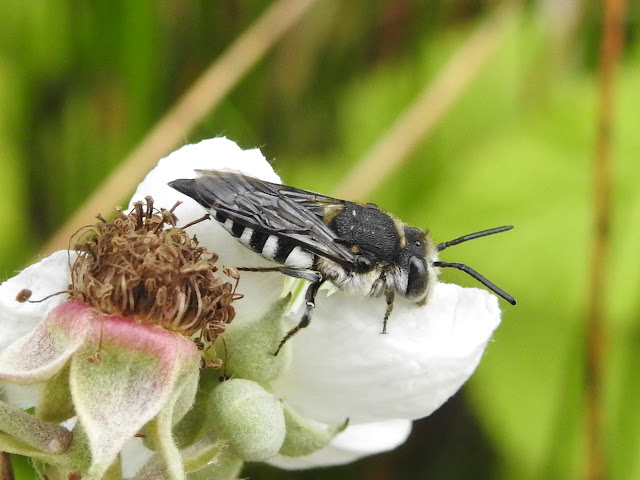 Large Sharp-tailed Bee - Alan Keatley
Several locally common species were first discovered on site this year, filling obvious gaps in the Warren list. With some as close as The Maer at Exmouth is wasn’t a surprise that they were eventually recorded at the Warren. These include Common Mini-miner Andrena minutula on 13 June, Common Yellow-faced Bee Hylaeus communis on 20 June, and later in September, a Bare-saddled Colletes Colletes similis on 3rd, Brown-footed Leafcutter Megachile versicolor  and Common Furrow Bee Lasioglossum calceatum on 10th and Orange-legged Furrow Bee Halictus rubicundus on 12th. 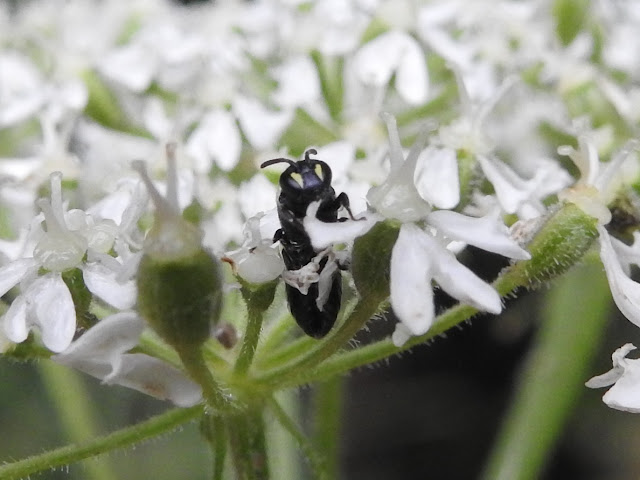 Wasps form a very large and diverse group of species. Over the years over 150 species have been recorded at Dawlish Warren, in the past many of these would have been identified by collecting specimens. Recent records are by sight alone, so only the most recognisable can be identified to species level.

This year 33 species were recorded, out of these six were new for site. The least expected newcomer was the ichneumon wasp Callajoppa cirrogaster seen 16 July. One of the largest and most spectacular looking British ichneumon, it is a parasitic wasp of hawk-moth caterpillars. Other ichneumon wasps found this year were Pimpla rufipes, Apechthis compunctor and Enicospilus ramidulus. 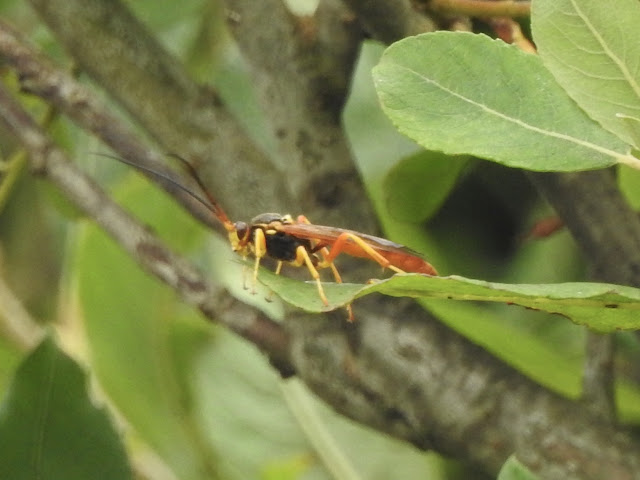 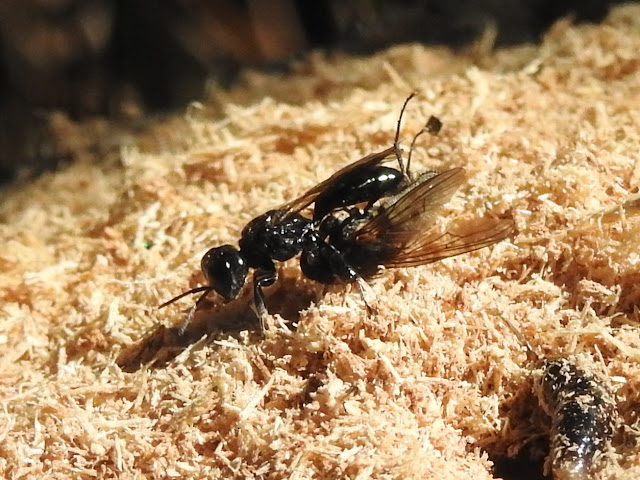 A few spider-hunting wasps species can be found patrolling at ground level over open areas. Many are difficult to identify, one that can be identified is Leaden Spider Wasp Pompilus cinereus. Another easily identified species Red-legged Spider Wasp Episyron rufipes, is a frequent visitor to umbellifers, the first of the year seen on 19 May. 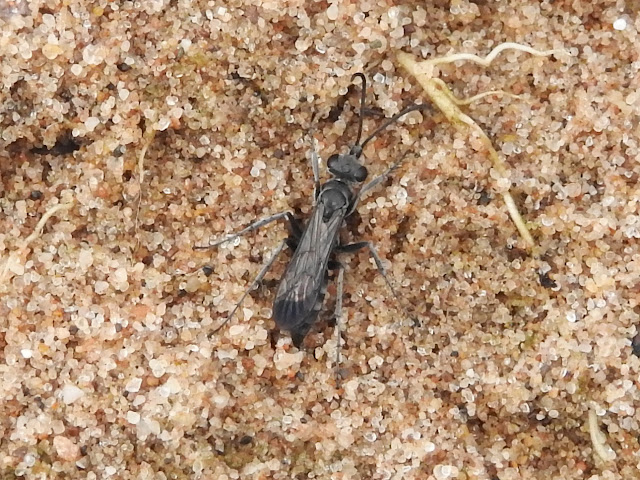 The plant galls of ten gall wasp species were recorded, amongst these were two new species, both found on oak, Striped Pea Gall Wasp Cynips longiventris and Neuroterus saliens.

Social wasps had a good year, both Common and German Wasp were numerous with several nests scattered around the site. Both species were active until on ivy until mid November, with a final Common Wasp on 19th December. A welcome record was Hornet, with two October records of this, less than annual, impressive social wasp. 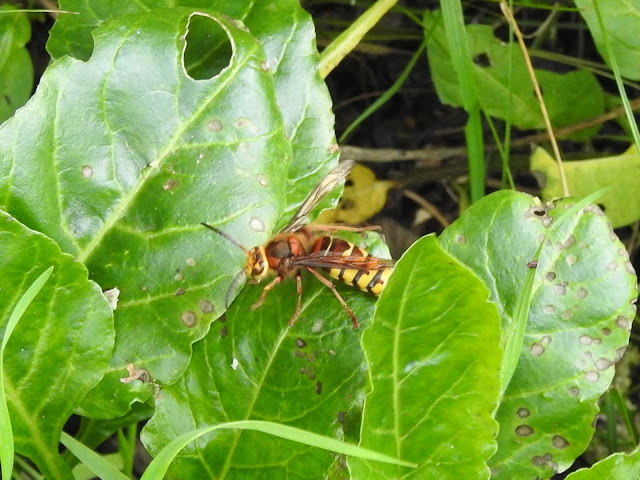