Both levels of the hide were packed out with visitors during the lunchtime high tide period and the murky inclement conditions grounded many migrants for everyone to see with increases shown as 269 Dunlin, 192 Ringed Plover, 40+ Sanderling and 13 Common Sandpiper.  Also in the estuary and The Bight, counts included 225 Sandwich Tern, 22 Common Tern, 12+ Mediterranean Gull, five Turnstone, two Grey Plover, a Knot, a Greenshank and the Slavonian Grebe.

The juv Black Tern continued its stay and a new adult (single metal ringed) Roseate Tern rested for spells among other terns in front of the hide between foraging sorties.  Sandwich Terns ringed in Belgium, Netherlands, Wales and Farne Islands were present, including one bird that has lingered here for nearly four weeks.  Terns continued to bring in 'whitebait' to feed their semi-dependent young, which stand about on in the estuary waiting to be fed. Neither Sandwich Tern nor Common Tern breed in Devon and the bond between parent and young clearly remains strong during their long journeys over hundreds of miles during autumn migration.

Offshore, a dozen Common Scoter, two Arctic Skua and a Great Skua.  The bushes continued to hold a Coal Tit and yesterday's Treecreeper, loosely associated with a mixed tit and warbler flock. Overall totals included 13 Long-tailed Tit, 18 Blackcap, 13 Chiffchaff and four Whitethroat. With these birds and the finch flocks about, the sighting again of the female Sparrowhawk was unsurprising.

Wildlife news: despite the conditions, a few invertebrates were found with European Beewolf Philanthus triangulum the highlight. 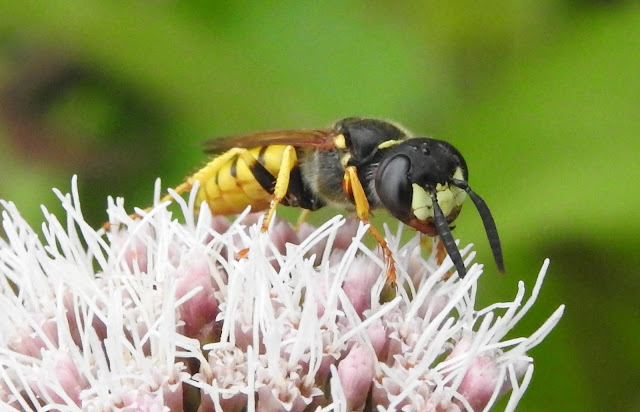