With a fresh southwesterly and heavy showers coinciding with the late morning high tide, hopes were raised for an influx of birds taking shelter in The Bight and estuary. In the event, numbers were on a par with recent days though by collecting close in front of the hide, visitors were treated to some great views and of fascinating insight of their lives as revealed by their uniquely colour-coded and metal rings.

Among these was a 2nd-calendar year metal-ringed Ringed Plover, the third recorded at this site from Germany, near the Denmark border.  These are of the nominate race hiaticula, the same as those that nest in the UK; a multi colour-ringed Dunlin from Wales (as a migrant there); a number of coded red-ringed Sandwich Tern from Wales, two coded yellow-ringed birds from the Netherlands, and metal-ringed Sandwich Terns from Germany and one from Lady's Island Lake, Co. Wexford, which was ringed as a pullus there in June 1993, making it over 26 years old! This is its 3rd autumn seen here.  The oldest ever recorded Sandwich Tern is 30 years 9 months old. 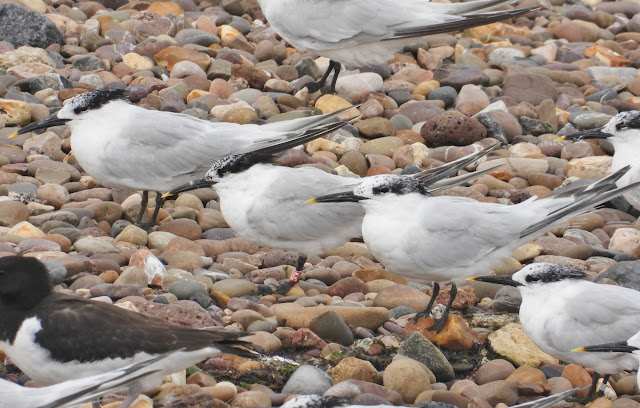 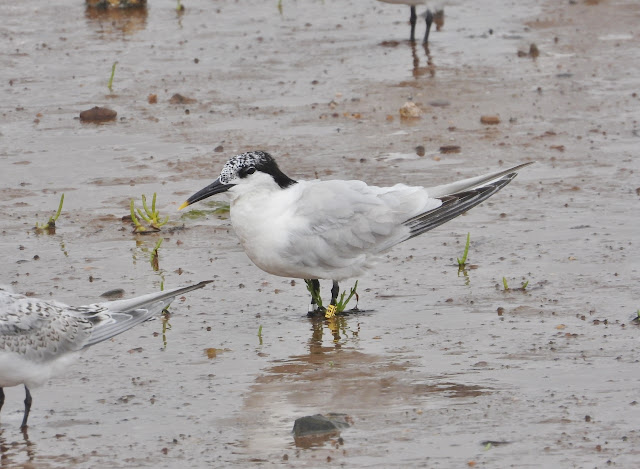 Sandwich Tern ('T87' was ringed in the Netherlands) - Lee Collins

Not breezy enough for this site, nothing of note was seen at sea.  Eleven Swift dodged the showers heading south.  A Treecreeper in the Entrance Bushes was new for the year, where also found were two Coal Tit and two Willow Warbler. A Wheatear was the only other obvious migrant.