The overnight rain and windy conditions saw a build up of waders and gulls in the Bight, which remained unflooded on the low high tide. At least 150 Great Black-backed Gull moved through, the highest site count since 2018 for this rapidly declining species, at least six were ringed, with them 26 Lesser Black-backed Gull, including at least two intermedius birds and a second winter Yellow-legged Gull.

Ringing News: One of today's Sandwich Tern was a blue colour-ringed juvenile, although too distant it was likely the bird recorded on Saturday. This bird, Blue TAK, was ringed in the nest in late August on Texel in the Netherlands. 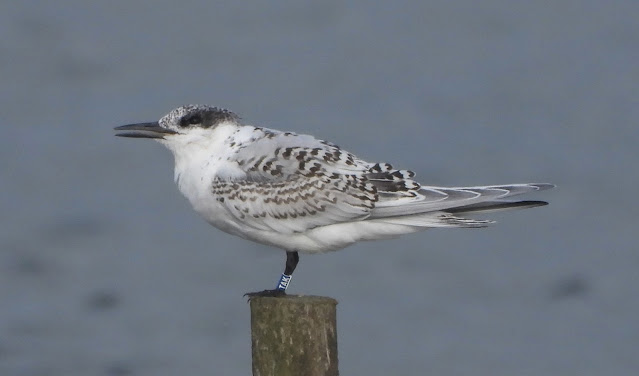 The lateness of this record is because the adult birds deserted their colony due to Avian influenza. Some surviving birds, these included, relocated to a new site and successfully raised broods.

Amongst the six colour-ringed Great Black-backed Gull seen today two were new birds from northern France and the Channel Islands, with four regulars/returnees, from Norway, France, Portland and Looe, Cornwall.