Dawn broke to the coolest morning of the autumn so far and in the face of a stiffening NNW breeze, steadfast 'vis-mig' observers were rewarded with a Great White Egret that nonchalantly drifted south, circling the site once at height before it departed at 08:06; the third to pass the site this year. Also on the move, 137 Jackdaw, 116 Woodpigeon, 94 Goldfinch, 47 Skylark, 46 Lesser Black-backed Gull, 28 'alba' Wagtail, 20 Meadow Pipit, 18 Shelduck, eight Chaffinch, six Song Thrush, four Stock Dove, three Rook, two Golden Plover, a Sparrowhawk (another hunted the bushes) and a Lesser Redpoll. 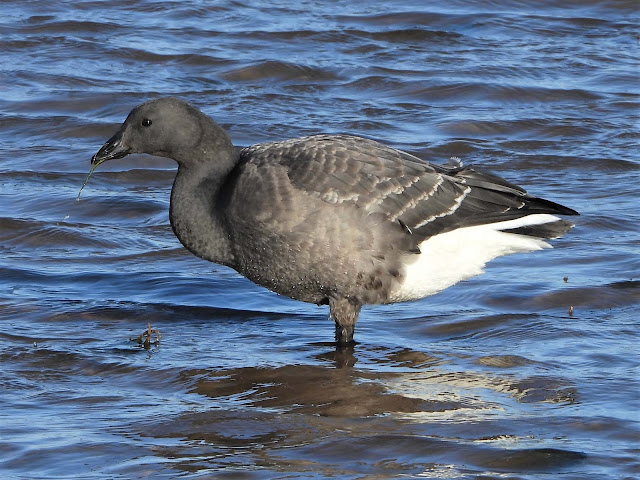 Details of the colour-ringed Black-tailed Godwit seen today was ringed as a pullus in Iceland in 2007 and has since accumulated a long sightings history, having been seen in Dublin Bay in a few springs, overshot a couple of times into N France in early autumn and it typically winters on the Exe Estuary.

The Cetti's Warbler was again heard chattering from the Main Pond. The bushes were quiet, holding four Goldcrest, two Chiffchaff, two Reed Bunting, less Linnet and scattered individuals of Stonechat and Cirl Bunting. A glary sea only revealed two Red-throated Diver and awareness to the presence still of a large feeding flock of gulls and seabirds far offshore.
Posted by Dawlish Warren at 16:02