Mixed weather today with light showers, some hot spells of sunshine and a persistent moderate easterly. Short sessions of sea-watching produced 28 Manx Shearwater, 20 Gannet, four Fulmar and a single Common Scoter.  In the evening, most of the 17 Mediterranean Gull (5 fs, 5 ss, 7 ad) present foraged offshore.  The neap tide (2.7 metres at Exmouth Docks gauge) was nearly as low as 'high tides' get here and this failed to push in any representative numbers of waders into The Bight, where instead the pair of Canada Goose and their three goslings trudged across the flats, 700 metres from their Main Pond nest site and evidently having accepted  defeat to the imposing resident pair of Mute Swan with which they had battled for supremacy.  Eight Sandwich Tern within the recording area were part of a total of 25 birds further up the estuary.

Elsewhere, three Swallow and single Swift and House Martin were overhead. Four speckled youngsters of the 'Dune Pond' pair of Stonechat were their second successful brood of the season.

Wildlife news: migrants were abound with hundreds of Marmalade Hoverfly Episyrphus balteatus, tens of Silver Y and a few Pied Hoverfly Scaeva pyrastri on flower heads and in meadows everywhere on site; most had dispersed by the afternoon.  A Marbled White was the first of the year and other butterflies present were lots of Small Skipper and Meadow Brown, some Common Blue and Speckled Wood, three Red Admiral and a Large Skipper.  With all the insect activity, a couple of Emperor Dragonfly quartered sheltered areas.   Tree Bumblebee were on bramble flowers around the Entrance Bushes and a wide variety other invertebrates were found today along un-strimmed paths and grasslands, as they should be at this time of the year. 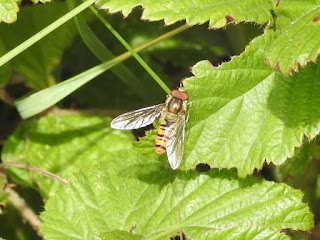 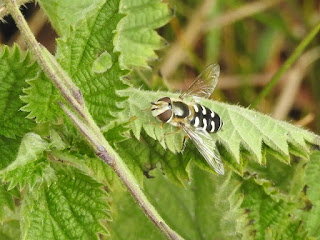 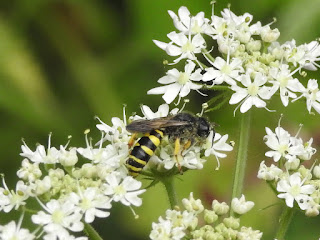 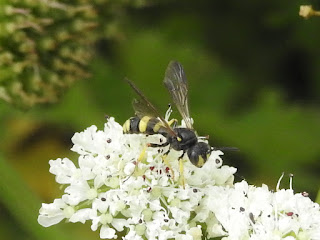