A search of the bushes and ponds this morning discovered a typical range of species for this time of the year with 20 Blackcap the highest count of the year so far and the largest ever count here in July.  Autumn passage for this species typically picks up quickly in Aug and peaks in Sep, as illustrated in the chart below of averaged max counts (which is different, of course, from a single max count throughout time). 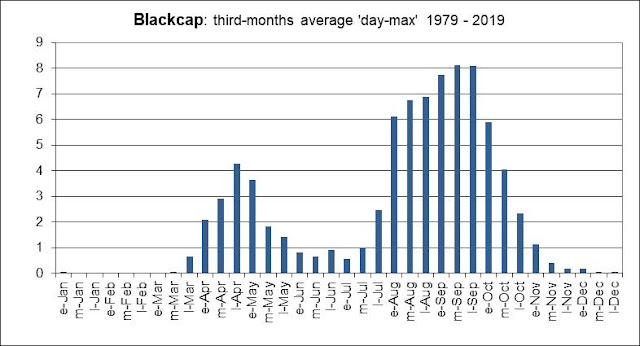 Also present, 18 Chiffchaff, nine Whitethroat, five Willow Warbler, five Blue Tit, three Great Tit, two Long-tailed Tit, the resident pair of Collared Dove, and single Great Spotted Woodpecker, Green Woodpecker, Sparrowhawk and a Kestrel. Notables were a Garden Warbler and a Sedge Warbler. Some of the five or more Reed Warbler included juveniles and were quite high in the willow canopy.  Elder birders may recall, with affection, reliance on the ground breaking field guide "The Shell Guide", as it was known.  The plate of plain 'acros' and regular 'hippos' was widely discussed among birders at the time due to portrayed Melodious Warbler as superficially resembling juvenile Reed Warbler, and was said to have been partly responsible for a number of dubious claims of 'hippo' in the 1980s, when they were actually in truth also more regular visitors to Britain.  In any case, juvenile Reed Warbler can especially become a pitfall when, as today, they leave reed-beds to forage more productively as foliar gleaners.

In bushes around the main car park, 60+ House Sparrow emerged from roost. On the Main Pond, 13 Mallard (plus ducklings), the pair of Mute Swan (plus two cygnets), some Moorhen and an immature Little Grebe.  Seven Swift flew south.
Posted by Dawlish Warren at 19:07