An unusually cold start to the day with the temperature dropping to -5.5c in Exmouth. Early morning the sand was set like concrete, with icy edges to the saltmarsh and the ground frost not clearing until late afternoon. In total at least 77 species were recorded today but not all sightings have yet been received. 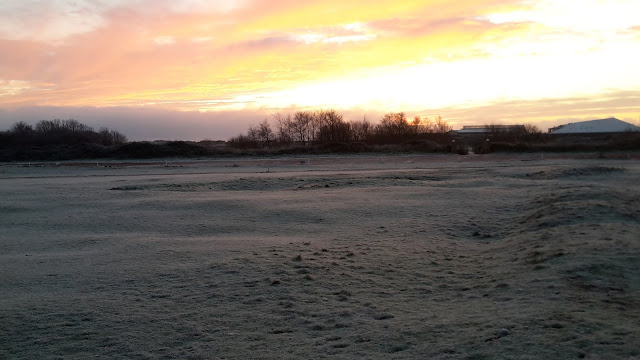 The highlight was an unexpected male Blackcap, a very rare winter record for the Warren, other passerines included the wintering Firecrest and Scandinavian Rock Pipit, two Chiffchaff, two Redwing, nine Cirl Bunting and a Green Woodpecker.

In the estuary wildfowl numbers had increased with seven Shoveler and a female Pintail amongst 459 Teal and 102 Wigeon. The Slavonian Grebe was joined by a single Little Grebe with 11 Red-breasted Merganser also present. Waders included 132+ Knot, 30+ Ringed Plover and seven Greenshank.

Wildlife News: At least two Harbour Porpoise were offshore, a Grey Seal was in the estuary and at least two Water Vole were recorded.