A vocal Roseate Tern was in front of the hide this evening with counts from the estuary including 468 Curlew, 130+ Sandwich Tern, 88 Dunlin,15+ Whimbrel, seven Bar-tailed Godwit and single Ringed Plover, Redshank and Greenshank. Elsewhere a Red-throated Diver and 115 Common Scoter were offshore, 72 Sanderling were on the beach, at least five Mediterranean Gull were on site, the Slavonain Grebe was in Shutterton Creek and five Sand Martin flew through. 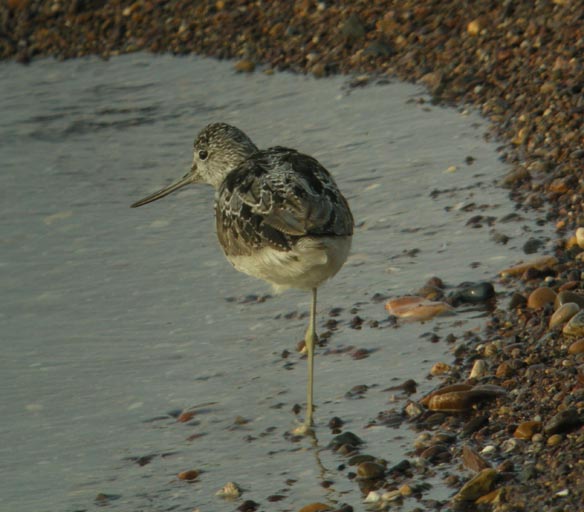 Greenshank 21/07/13 © Dave Jewell
Another couple of darvic rung Sandwich Tern were recorded today, a juvenile (White NL1) and its probable parent (Red ELV) from the same colony as yesterday's bird, Markenje, near Ouddorp, Zuid-Holland, the Netherlands. The parent was rung at Heist, West-Vlaanderen, Belguim in July 2007, whilst the colour ring was added when it was retrapped on the Ythan estuary, near Aberdeen in August 2011. The next sighting was on Markenje in June 2013 before it appeared at the Warren this morning.

What is most interesting is that this is a bird that chose to migrate north in 2011 (in its 5th calender year), but this year migrated in a different direction. This would suggest that terns indeed make a choice, to migrate north, south or west after the breeding season, showing that a network of protected sites are essential for the survival of this species. Thanks again to Pim Wolf and, in Scotland, Ewan Weston for the rapid dissemination of ringing data.

Wildlife News: The welcome first Ringlet of the year was around the Entrance Bushes.