Six Pale-bellied Brent Geese in the estuary were new arrivals, one of them was ringed so we should soon know where they arrived from. Also in the estuary counts of 2300 Dunlin, 235 Dark-bellied Brent Geese, 195 Grey Plover, 148 Redshank, 117 Bar-tailed Godwit, 66 Shelduck, 57 Knot and the two Slavonian Grebe. The roosting Dunlin were continually harassed and scattered by several Carrion Crow, one was eventually chased down in flight and was killed in front of the hide. Elsewhere a Dartford Warbler was on Warren Point, two Shoveler were on the Main Pond and single Red-throated and Great Northern Diver were offshore. 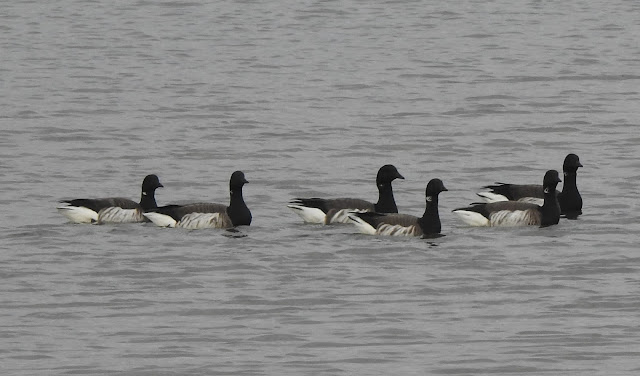 Wildlife News: A Peacock along the Dune Ridge was not unexpected given the unseasonal weather.
Posted by Dawlish Warren at 20:24