Ringing News: Details have come back on the Pale-bellied Brent Goose seen last Friday; it was ringed in Iceland at Álftanes on 16 May 2014 and is a well travelled and well tracked individual. 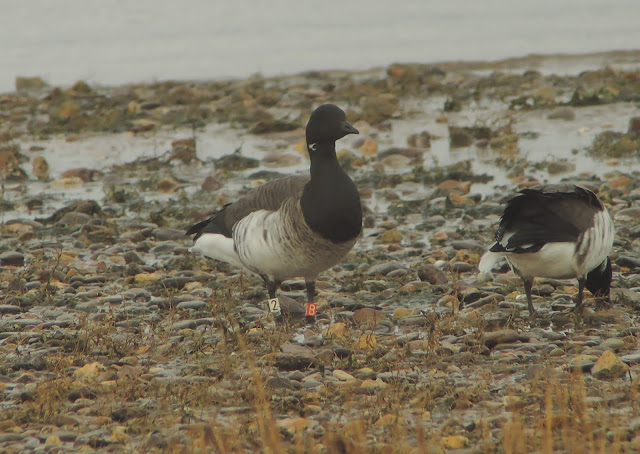 Pale-bellied Brent - Lee Collins
It was at Strangford Lough, Co Down, Northern Ireland in Sep-Nov 2014, before being seen on the Fleet in Dorset in Nov-Dec 2014, returning north to Iceland by Apr 2015 via Milford Haven, Pembrokeshire in Jan 2015 & Dundalk Bay, Co Louth, Eire in Feb 2015.

It bred in Iceland in the summer of 2015 raising a single juvenile and repeated the same migration being at Strangford Lough in Sep-Oct 2015, The Fleet in Dec 2015 and Milford Haven in Dec 2015 before being recorded back in Iceland in May 2016.

This autumn it did it all over again and was at Strangford Lough on 23 Oct, on the Fleet on 26 Nov, at the Warren on 16 Dec and then in Pembrokeshire the next day!

The increasingly early return north is interesting and matches what is happening with Dark-bellied Brent Geese at Dungeness where birds have started moving back east the last four Decembers.