The first two records of the year were both Peacock with the first on 28th January, however this was an isolated sighting with the next one not appearing until 21st March. The exceptionally cold and wet start of the year meant the usual Spring species were at least three weeks late compared with 2017. It wasn’t until early April that the first few Comma, Red Admiral and Speckled Wood appeared. Other early species were almost non existent with just a single Brimstone and sadly the only Small Tortoiseshell of the year.

In contrast late Spring and early Summer species such as Green-veined White, Common Blue, Small Copper, Brown Argus and Meadow Brown were recorded in good numbers, whilst Holly Blue was confirmed breeding on site for the first time, however Orange-tip remain scarce. 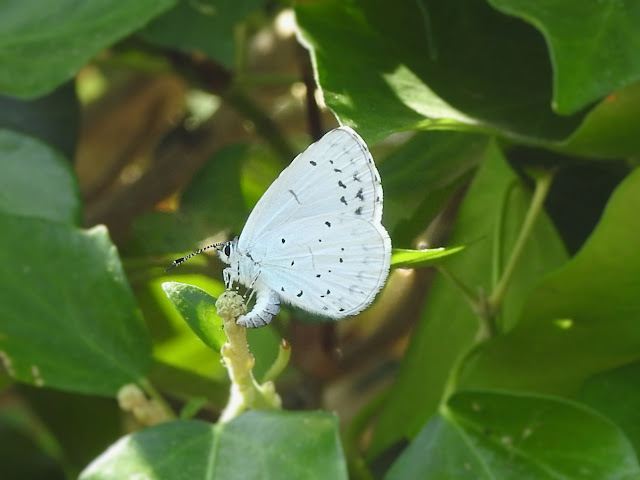 A couple of Green Hairstreak sightings, the first for several years, were a pleasant surprise and encouragingly a Wall Brown on 10th May, coupled with further sightings later on in the year, proved that this declining species still has a foothold on site. 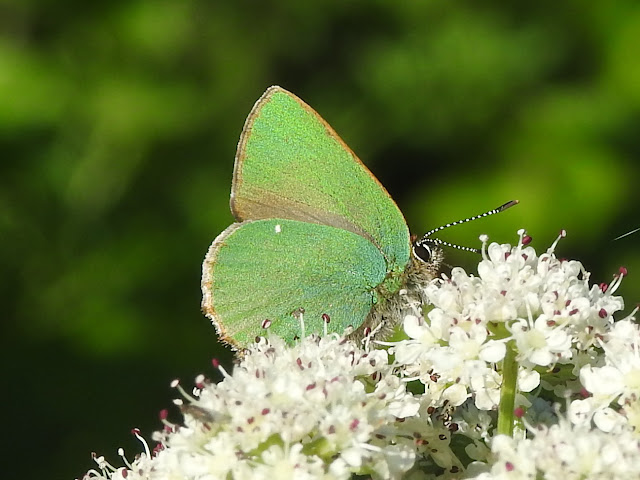 As Summer progressed, heat-wave conditions saw record numbers of Ringlet with a good showing of Gatekeeper, Large and Small Skipper but low numbers of the migrant Painted Lady. The same hot weather raised concerns about available food for many larvae, hopefully a second spell of vegetation growth later in the Summer will have eased these concerns.

Rarer occurrences included the second record of Purple Hairstreak, the third record of Large Tortoiseshell and the third and fourth site records of Silver-washed Fritillary. A Marbled White on 21st June turned out to be the only one of the year. 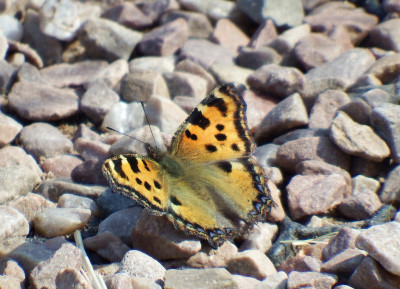 There was a steady but unexceptional flow of migrant Red Admiral and Large White through September and October, with only a few Painted Lady and a late flurry of Clouded Yellow. A late Wall Brown on 18th October was evidence of a third generation. The last report of the year was a Red Admiral on 1st December.


There was no moth trapping on site this year, so records were limited to day flying species, individuals found at rest and larval signs.
It wasn’t until May that moths were noted in any numbers and variety. The most obvious were groups of Green Longhorn Adela reaumurella lekking around mature Oaks and Sycamore but Yellow Belle, Pebble Hooktip and Buff-tip were also recorded. The first migrant arrival were Silver Y on the 19th, the first Hummingbird Hawkmoth all on 24th May and the first Diamond-back Moth on 30th. 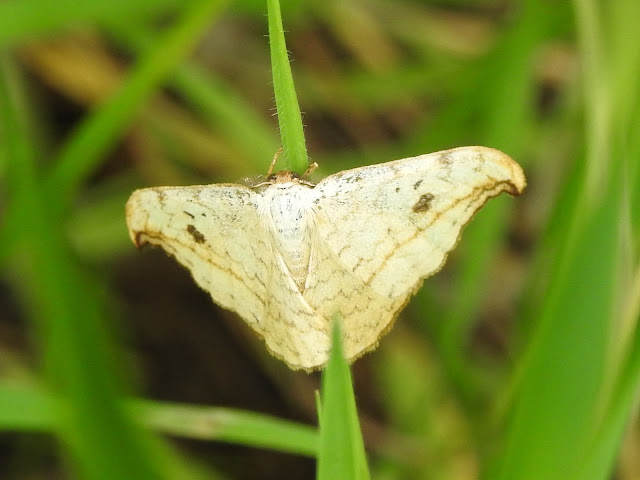 Pebble Hooktip - Alan Keatley
Three of Devon's rarer moths both remain on site despite differing threats. Work around the car park removed most of the breeding sites for Phyllocnistis xenia but a few occupied mines were eventually located. Along the strandline good populations of Acroclita subsequana and Gymnancyla canella were found on Sea Spurge and Prickly Saltwort respectively, but much of this habitat has since been lost to the sea. 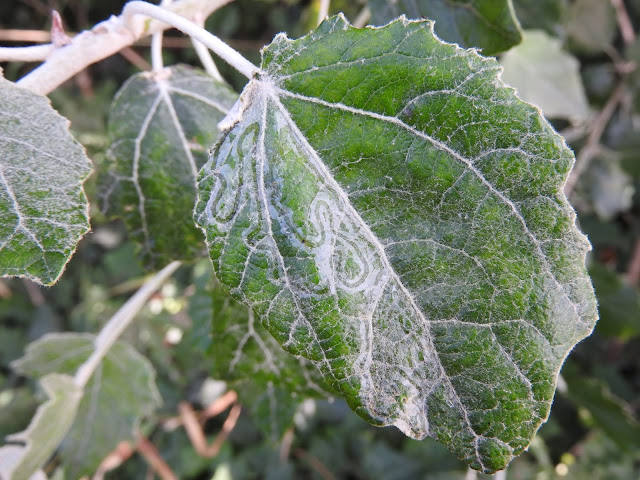 As Summer progressed Six-spot Burnet were on the wing in good numbers but the Tiger moths had another poor year with just a single Cream-spot and only a few Jersey Tiger. Silver Y continued to arrive along with a couple more Hummingbird Hawkmoth. 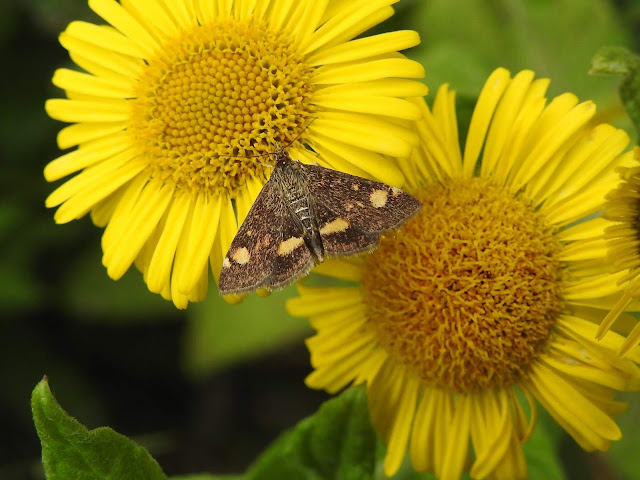 The first species to appear was an Azure Damselfly on the 13th May, the same date as 2017. The next species was on 16th May, a female Beautiful Demoiselle, much more unexpected as it was the first on site since 2010. 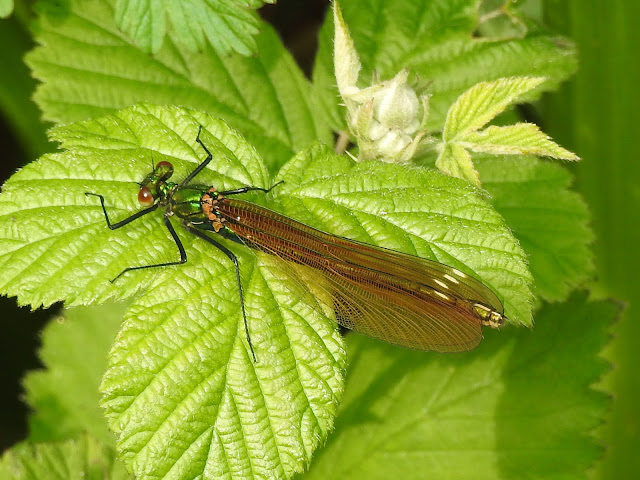 Towards the end of May Blue-tailed Damselfly started to out-number Azure as the commonest damselfly. The first dragonfly of the year was an Emperor on 28th May; unfortunately no sightings of Hairy Dragonfly were reported this year.

A Broad-bodied Chaser on 3rd June was welcomed after none last year. The first of a good series of Golden-ringed Dragonfly was on 14th June, vying and chasing off Emperors from its territory. The first Common Darter was on the wing in early June, but sightings remained infrequent until later in the year. 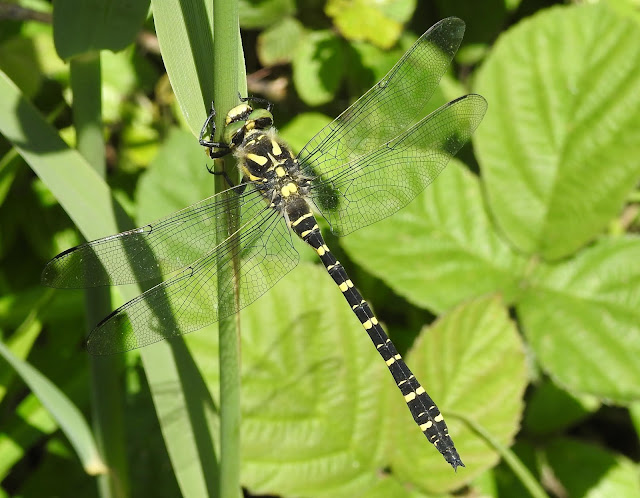 July started well with a male Banded Demoiselle at the Main Pond, the fifth site record, but the highlight was the confirmed breeding of Small Red-eyed Damselfly after several years apparent absence. By mid August Migrant Hawker started to appear in increasing numbers, regularly reaching double figures by the end of the month. A few Southern Hawker were on site by early September, but are never as numerous, Common Darter numbers continued to build. 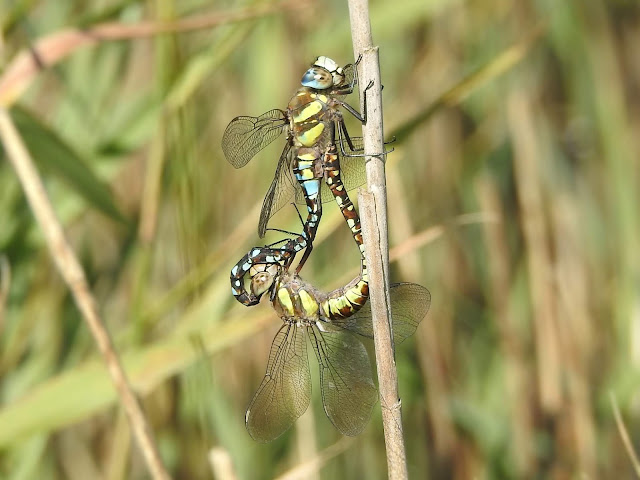 October records included the third site record of Vagrant Emperor on 18th, part of a national influx of this African species, a very late (second generation?) Blue-tailed Damselfly on 10th and a late Southern Hawker on 19th.

Both Common Darter and Migrant Hawker were still present in good numbers in late October but there were no November reports.
Posted by Dawlish Warren at 21:55